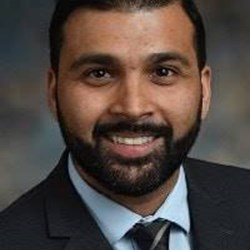 Junaid Munshi did pre-med coursework as an undergraduate at St. Louis University. Wanting to give back to humanity, and citing the quote in the Quran ‘whoever saves a life, it is as though he had saved all mankind.’ he settled on a career in medicine. “I wanted to go to work every day and bring goodness to my life by helping others. What I like about medicine is your whole purpose is just to help someone.” While Junaid came to Nevis, he says he worked hard, made great friends and loved the Nevis beaches. “All the late night studying and stress were 100% worth it”. Doing well in his clinical rotations, Junaid began a residency in Family Medicine at Louisiana State University Medical Center and distinguished himself with the “Resident Teaching Award”, “Research and Scholarly Activity Award” as well as the highest Step 3 score in his residency class. Currently back in St. Louis as Preceptor at both Washington University School of Medicine and St. Louis University School of Medicine. Junaid is thrilled now to be combining his second greatest passion (boxing) with his work as a physician. “Boxing is my favorite sport, and I have been following it since I was a kid. At every fight, I saw a doctor, and always dreamed of being that doctor. Certified by the Association of Ringside Physicians in 2018. Junaid has been the doctor in many televised fights on ESPN and DAZN. He has also been the ringside physician for multiple world title fights at the highest level of the sport. “One world title fight in New Orleans really stands out in my mind. A fighter sustained an injury. Due to the magnitude of the fight, there was hesitation to stop the fight. The fighter himself wanted the fight to continue as all fighters do. I intervened though, and stopped the fight knowing that was the right decision to make. The next day the fighter tweeted and thanked me. I knew that I had done the right thing at a crucial point in someone’s life”.

General Surgery Resident, St. Luke’s University Health
MUA graduate Kyle Dammann excelled at MUA, earning the “Dean of Clinical Medicine award” and matching into a General Surgery residency upon graduation. He blossomed academically at MUA, by his own admission working very hard and taking advantage of the great mentorship opportunities at MUA. “ I was not a good test taker going into med school, so I took the advice of people who had done well before me. I ended up scoring very well on the Step 1, Step 2 and Step 3 exams.”
Learn more