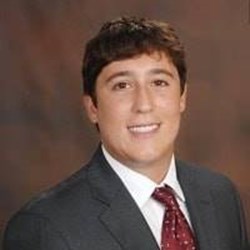 As a dual citizen with the United States and Italy, Peter is passionate about Italian literature and is proficient in Italian. He is also a member of Phi Sigma Iota, the International Foreign Language Honor Society. It was while working on his masters in Italian literature at Rutgers that he began volunteering on the side in his dad's gastroenterology office, shadowing doctors in the procedures of endoscopies and colonoscopies. He also shadowed emergency medicine residents and began to develop an interest in the fast paced lifestyle. He began to really enjoy the work, and soon came to realize that rather than becoming an Italian literature professor it was the field of medicine that he wanted to pursue.

"I didn't do that well in the first semester at MUA, and it took me that time to really learn how to study. Come third semester though, I was getting A’s and really taking advantage of all the resources that MUA offers the students." Peter went on to become a TA in both microbiology and pharmacology at MUA, and Class VP in his 4th semester.

It was after an interview at Henry Ford Allegiance Health in Jackson, MI that he knew where he wanted to match. "I enjoyed the program so much that I emailed the Program Director there and asked to do a second-look. I ended up having three shifts with the Program Director which definitely helped me match. It was my first choice for emergency medicine; it's a 60 bed level 2 trauma center and I really like the diverse amount of pathology that I was seeing."

Emergency medicine is a relatively new specialty, and has become a popular residency choice recently for the lifestyle it affords. "You go in and you work non-stop for 10-11 hour shifts, and then you go home and you are totally off. People who do EM can’t do anything else. They like the acuity of the patients and the fast paced environment." It makes good sense that this competitive ice-hockey player , and USA Hockey certified referee would strive to find this same adrenaline rush in medicine.

"I advise students to be determined, work hard, and know that you will have bad days. It's ok, just be determined and find a good study group!"

CEO, Neurology and Epilepsy Specialists, LLC.
Each year, some 150,000 people in the US are diagnosed with epilepsy. It's the 4th most common neurological problem (after migraine, stroke and Alzheimer’s disease) and a focus for many neurologists, including Puja Naik, a 2010 Medical University of the Americas graduate.
Learn more