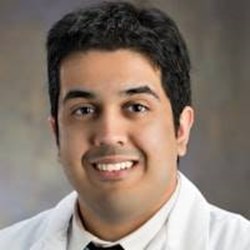 Fellowship in Pediatric Hematology/Oncology in Detroit

Becoming an MD wasn’t initially part of Ahmar Urooj Zaidi’s life-plan: he was planning on a PhD in Neuroscience. But when a friend attending Medical University of the Americas told him about the school he applied, graduated in 2011 and went on to a fellowship in pediatric hematology/oncology in Detroit where he is part of a major research program focused on sickle cell anemia.

Canadian by birth, Ahmar intended to pursue a PhD in Neuroscience at McGill University. But as he neared the end of his undergraduate years, a series of conversations with a friend attending Medical University of the Americas led to a change in plans. Making the trek from Canada to the Caribbean was a big step, but Zaidi says the experience primed him for what was to come. “The classes and the work at MUA prepared me very well for the USMLE Step 1 and the board exams, but even more important I learned how to be very adaptive to changing situations and that’s an extremely important part of medicine.”

Canada, though, was never far from his heart and after completing his fourth-year clinical electives in Michigan he chose to stay in Detroit. The decision was made easier not just by the proximity to his family in Canada, but also when the Department of Pediatrics at Beaumont Children’s Hospital offered to pre-match him as a resident in pediatrics. Working under mentors who were experts in pediatric blood and cancer led to acceptance into a three-year fellowship in pediatric hematology/oncology at Children’s Hospital of Michigan where he is now at the center of a major effort to tackle sickle cell disease (or sickle cell anemia).

A genetic condition that damages the hemoglobin in red blood cells, sickle cell disease is prevalent among populations that trace their ancestry to Africa, the Middle East and South Asia. “It is a debilitating disease,” said Zaidi, “with most not living past the age of 50.”

While some progress in countering the disease took place decades ago, the pace has slowed since the late 1980’s, but Zaidi is hopeful that is now going to change. His current research involves electronic patient-reported outcomes and the discovery of bio-markers to determine the predictability and severity of pain experienced by children with the disease.

“We are in the golden age of research on sickle cell,” said Zaidi. “We have targets to work with and we are making real progress in understanding pathophysiology and treatment.” The Children’s Hospital of Michigan where he is conducting the research is the one of the largest pediatric sickle cell centers in the country.

“I hope to make a real difference in the lives of the thousands of people who suffer from this disease. It’s a vindication of everything I wanted from the time I headed to MUA to become a doctor.”

Surgeon, Associate Director of Fellowship Program at Center for Innovative GYN (CIG) Care
Dr. Rupen Baxi, a graduate of Medical University of the Americas, is a member of the surgical staff and Associate Director of its Fellowship program. Upon graduating from MUA, Rupen went into an internship in General Surgery and then an OB/GYN Residency at Richmond University Medical Center.
Learn more

Radiology Intern Residenct at Louisiana State Health Sciences Center
"The teachers were very knowledgeable, and they know if you have pre-read the materials. They really cared and check to make sure that you are understanding all that they are teaching. That’s really the beauty of the small class size. To be honest, it also helped build my self-study habits by reading ahead."
Learn more