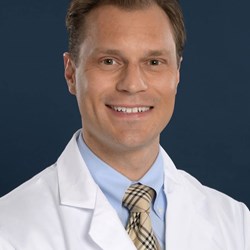 MUA graduate Kyle Dammann excelled at MUA, earning the “Dean of Clinical Medicine award” and matching into a General Surgery residency upon graduation. He blossomed academically at MUA, by his own admission working very hard and taking advantage of the great mentorship opportunities at MUA. “ I was not a good test taker going into med school, so I took the advice of people who had done well before me. I ended up scoring very well on the Step 1, Step 2 and Step 3 exams.”

As an undergrad at University of Louisiana Monroe (ULM), Kyle was a competitive water skier (nationally ranked) and freely admits to initially not taking academics in college as seriously as he might have. An ACL injury changed his focus though, and upon graduation he went on to earn both a masters degree in Genetics from ULM, as well as a Doctorate in Philosophy from Medical University of Vienna. “ I was doing my PhD on inflammation-driven colon cancer in Vienna, and learning German. I had some mentors there who were orthopedic surgeons and they really influenced me. I realized that I wanted to be able to make a difference now in someone’s life, and just doing research wasn’t going to enable me to do that. I needed to get an MD”.

Kyle was introduced by one of his U.S professors to two Canadian MUA students who highly recommended the school (“and they were Canadian so super nice”). “I made one really good friend at MUA and worked super hard. The school did a great job getting through the material. I had a strategy through clinicals. I listened to people who had matched into surgery and followed their advice. MUA worked with me to help with the match. They bent over backwards to help me meet deadlines. They helped set up certain rotations for me to further my goal. I highly recommend MUA, it will get you where you want to go,but you have to do your part. ”

Internal Medicine Resident, Sinai Hospital Baltimore
It's always great when your career and your passion align. MUA Graduate Nasir Alhamdan did his undergraduate studies at Ryerson University in Canada. He completed his medical school pre-requisites in three years, making the Dean’s List and earning his undergraduate degree in Bachelor of Science.
Learn more

Resident Physician, Physical Medicine and Rehabilitation
Volunteering and giving back have always been part of Dr. Sitapara’s life. He served as part of the emergency medical team at the NYC marathon this past November and shares “it is one of the largest mass injury events of the year, where hundreds of people are treated for mostly sprains, dehydration and other non-life threatening injuries.”
Learn more