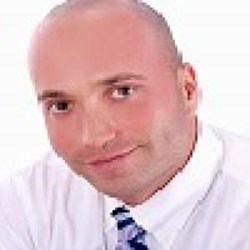 To help launch his career in medicine, Adam Weltz started out at the bottom (literally) getting some of his first real healthcare experience mopping floors and taking out the trash in an operating room. Now this 2011 graduate of Medical University of the Americas is headed to the top, completing a two-year fellowship in minimally invasive surgery under one of the pioneers in the field of surgery.

As a Presidential Scholar at George Washington University, Adam was focused on pre-law. Then in his senior year, his interests began to change. Working as a personal trainer at a local gym to help pay for college, Adam struck up a friendship with another trainer who was also a surgical technician and would often share stories about the operating room. Around the same time, Adam’s father was diagnosed with a heart condition requiring emergent surgical intervention. Suddenly immersed in the medical world, Adam discovered he was fascinated by it.

So fascinated, that after graduating college Adam took a job as an operating room assistant, taking advantage of the opportunity to watch the surgeons up close and then cleaning up after the work was done. One of the surgeons, taking note of Adam’s strong interest and unwavering work ethic, invited him to come along on a medical mission to Kashmir in 2005, part of the earthquake relief efforts of “Operation Heartbeat.” When Adam returned home to the states, he was committed to pursuing a career as a physician and surgeon.

Adam’s first step was to choose a program that would enable him to make-up the pre-med courses he had missed in college. Adam applied and was accepted at all of the leading medical schools in the Caribbean. Accompanied by his father, who had recovered well from his own operation, they visited every one of them and ultimately chose MUA. “I appreciated the atmosphere at MUA; the small classes and the accessibility of the professors, and I was convinced I would have my best chance of success if I went there. MUA offered the best combination of residency appointments and affordability.”

Enrolled in the Pre-Med Program at MUA, Adam served as Class President and then matriculated into the medical program. During his Basic Sciences studies on the Nevis campus, he made the Dean’s List, was President of the Student Government Association and Vice President of the Student Surgical Association. He also continued his passion of personal training and exercise and became a regular on the Fit Wellness Show, a local television program on Nevis designed to educate and motivate residents on healthy lifestyle choices.

In his clinical rotations, which were all completed at University of Maryland and Johns Hopkins University affiliated hospitals, Adam set his sights on obtaining a top residency in general surgery. Although he was enamored by human anatomy and physiology and the ability to definitively cure disease in the operating room, Adam credits Dr. J. Larry Fitzpatrick, Chairman of Surgery at Mercy Medical Center as the defining mentor that helped him choose general surgery.

“Dr. Fitzpatrick gave me a fantastic opportunity to spend a few months with him on his service which really threw gas on fire for me with regard to my goals of becoming a surgeon. Fitz is universally loved and respected by the students and residents he teaches. You’ll never find another surgeon more interested in sharing his knowledge and experience with others. It really is infectious. He is truly a remarkable human being and someone I owe much of my success to.”

Matching into a highly competitive five-year general surgery residency at University of Maryland, Adam was named Intern of the Year and won numerous other awards during residency, including the American College of Surgeons Leadership and Advocacy Scholarship Award and the Society of Laparoendoscopic Surgeons Outstanding Resident Achievement Award, and rose through the ranks to serve as Chief Resident in his final year. Immediately following his residency graduation, Adam sat for both oral and written general surgery board exams given by the American Board of Surgery, successfully passing both examinations on the first attempt.

Currently, a board-certified general surgeon, Adam is completing a two-year fellowship in Advanced Gastrointestinal and Robotic Surgery at the prestigious Anne Arundel Medical Center in Annapolis, Maryland. He is training under Dr. Adrian Park, a founding member of the Fellowship Council, and one of the world’s leading minimally invasive surgeons, responsible for major advances in laparoscopic procedures including the development of new medical devices and operating-room-of-the-future technologies.

General Surgery Resident, St. Luke’s University Health
MUA graduate Kyle Dammann excelled at MUA, earning the “Dean of Clinical Medicine award” and matching into a General Surgery residency upon graduation. He blossomed academically at MUA, by his own admission working very hard and taking advantage of the great mentorship opportunities at MUA. “ I was not a good test taker going into med school, so I took the advice of people who had done well before me. I ended up scoring very well on the Step 1, Step 2 and Step 3 exams.”
Learn more

Internal Medicine, Bethesda Health Physician Group, Wellington, Fl.
When Joseph Jose attended Medical University of the Americas, he had much of the campus to himself. Enrolled in one of MUA’s first classes, his fellow classmates numbered under 20.
Learn more